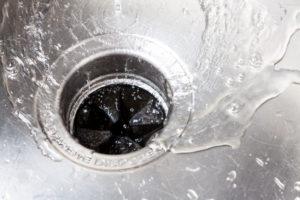 easily break down, block, or clog your kitchen drain. Always be careful about what foods you put down the drain to keep your garbage disposal working smoothly for many years to come. Here are a few foods you should avoid dumping down the garbage disposal:

Bones: It’s NFL Football season and that means bbq, beer and bones…chicken bones that is. After the party is over don’t dump the discarded chicken bones down the garbage disposal. The bones will just keep spinning round and round with the blades. They’ll never make it down and may clog your drain. Make “no bones” about it.

Potato peels: A South Land Park woman was having a family Thanksgiving with all the fixins’ when her husband volunteered to peel the potatoes. He peeled them in the sink and let the peels go down the garbage disposal. Guess what happened? It caused a soupy mess and a clogged drain. The husband also slept on the couch that night. True story!

Grease or oil: Never dump grease down the kitchen sink. It will eventually solidify and clog a portion, or all, of your drain. Remember this next time you fry up some delicious bacon for a bacon double cheeseburger.

Egg shells: Somehow egg shells are controversial. Some folks say egg shells help sharpen the blades of the garbage disposal. Others say putting egg shells down the disposal will create “sand-like particles” and stick to the pipe walls, slowing the drain and possibly causing a clog. We say play it safe. Just toss ‘em in the trash!

Pits or seeds: Having a clogged drain is the pits! Just make sure you don’t pour pits or seeds down the garbage disposal. They’re too hard and small for the garbage disposal to chop up. Pits and seeds may jam your disposal. When you’re cutting and gutting your pumpkin for Halloween DO NOT dump the seeds or gooey guts down the drain. The gooey pumpkin pulp is stringy and slimy and can cause other stuff to attach and clog up the drain.  That would be SCARY!

Coffee grounds: Back in the day grandma thought coffee grounds were good for the pipes.  “It keeps them clear and smelling fresh!” she would say. This is categorically untrue. Sorry Grandma. It’s an old wives tale…or an old Grandma’s tale. Either way, when you dump a bunch of soggy coffee grounds down the drain, they’ll turn into an impenetrable nightmare. The grounds can get stuck in the trap of your garbage disposal and wreak havoc.

Corn husks, celery, and asparagus: These vegetables are good for you! Unfortunately they aren’t very good for your garbage disposal. They have long, stringy, fibers that can become entangled around your garbage disposal’s blades, causing it to stop working. Don’t strangle your disposal! Play it safe. Leave these veggies for the garbage or even your compost pile.

Pasta, rice, and beans: Keep your garbage disposal on a no-carb diet. Rice and pasta should never be dumped down the garbage disposal. They swell once they come in contact with water, and they are sticky, making it hard to go down the drain.