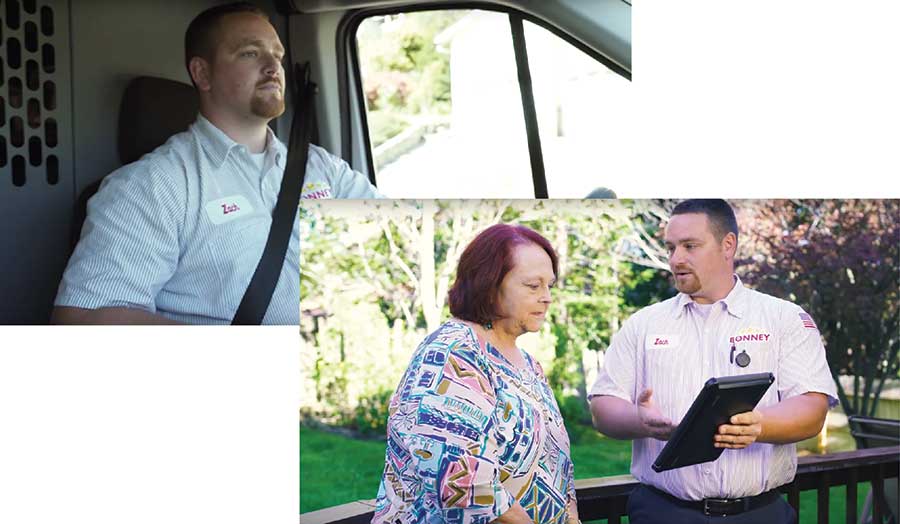 Halfway through the tune-up Zach could faintly smell smoke. At first he thought somebody was barbecuing nearby, “I didn’t really think too much of it,” Zach said. While he continued with the 5-star AC tune-up he noticed the smoke was becoming  more intense and that’s when he thought  “something is definitely wrong”. He hurried down from the roof and came upon the homeowner throwing a hose over her back fence in a panic. The homeowner, Jill S., said, “Zach was awesome! When he realized I was standing on my fence to put out the fire in the backyards behind me he immediately leapt into action!”

“You have to make a decision if you want to find a result, I couldn’t just stand there and watch the fire burn out of control”, Zach said.

As Zach peeked over the fence he could see flames rolling underneath it.  His military experience helped him with quick decision making. Without any hesitation he jumped the fence and grabbed the hose to put out the fire. Once Zach jumped over the second fence he discovered the backyard was completely scorched with soot and flames flying all over the place.  It was a grass fire with a bunch of dried leaves adding fuel to the fire. Zach said, “That’s the part of the fire that was rolling under the fence”.  The source of the flames were coming from the other side.

He went to grab the second homeowner’s hose to put out the flames but it was completely melted. “I felt like I could control the fire even though it was getting bigger”.  Zach said. He turned on her water spigot in the backyard and let it start flooding. He also found a bucket and filled it with water to douse the flames .

He was able to get the attention of the other homeowner who’s backyard was on fire by knocking  on doors and windows several times and that’s when he got her attention.  She asked, “What’s going on?” Zach said, “Your backyard is on fire, call the fire department!”

In the meantime she found another hose in the garage to help douse the flames.  “If she didn’t have that hose, I don’t know what would’ve happened”. The flames were starting to spread dangerously close to the house.

Zach humbly remarked, “The fire wasn’t anything too crazy, it was a low grass fire that was spreading . The big parts of the fire were where the piles of leaves were. It wasn’t anything I couldn’t control.”

Jill S., the homeowner told us, “Zach had it all completely handled by the time the Sacramento Fire Department got there”. He hosed it all down and that’s when the fire department arrived. They gave Zach a bunch of kudos and a pat on the back.

The courageous actions and quick thinking of Zach V. to extinguish the flames is something a superhero wearing tights and a cape would do. Zach is not only a 5-star Bonney HVAC technician, he’s also our Superhero of the day!