Out in the field with Bonney 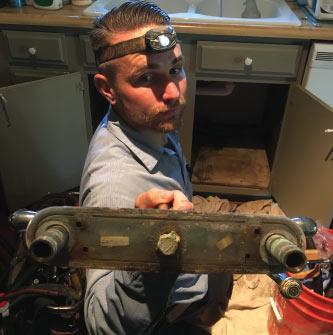 A Bonney customer in Natomas was concerned he may have a slab leak underneath his kitchen floor. A slab leak is a leak that occurs under the foundation or concrete slab. It’s a serious and costly matter that should be addressed by a professional as soon as possible. One of our Certified Premiere Plumbers, Dustin H., went out to take a look.

Dustin introduced himself to the homeowner, Todd L., and immediately began diagnosing the customer’s concerns. The first thing Dustin did was make sure all of the faucets were turned off and that the toilet wasn’t running. Then he went outside to check the home’s water meter. With all fixtures off and no water running, the water meter dial should not be moving unless there is a  slab leak. When Dustin inspected the water meter in the front yard the water meter dial was not spinning, and that meant no slab leak. Which was great news for Todd because he had a pristine laminate wood floor. It would have been a shame to jackhammer through the beautiful floor to find the slab leak.

While inspecting the kitchen sink, however, Dustin noticed some water damage under the sink inside the cabinet. He discovered a deluge of leaks that were causing all the water damage. Water leaks are a common occurrence under kitchen sinks. If left unrepaired they can cause significant damage to the cabinet floor and more by promoting wood rot, warping, mildew growth and mold. Leaking water supply valves, faucets, and drainpipes are the common culprits of most sink cabinet damage.  Dustin informed Todd about the water leak issues in the cabinet as well as in the brass housing of the faucet. It’s a good thing Dustin noticed the leaks before they caused too much extensive damage.

Todd asked, “Can you fix it all now?” Dustin told him “of course”. “Great, do it all.” He said. Another benefit of our “warehouse on wheels”, we have all the parts that are needed in our Bonney trucks. Which gave our customer, Todd L., a sense of relief.

While Dustin put on his LED headlamp and went to work, Todd told Dustin he had a handyman come out recently to install the garbage disposal but he never mentioned all the leaks. The handyman also didn’t complete the garbage disposal installation. “He had to go to Home Depot 3 or 4 times and it took him 4 hours to do it”. Todd said.

Dustin re-installed the garbage disposal at no charge. He actually finished the job the handyman didn’t.

At Bonney Plumbing, Heating, & Air we appreciate our loyal customers. They always seem to have a personal story to tell. Todd mentioned he’s been a Deputy Sheriff for Sacramento County for over 37 years.  His dad, older brother, and his sister-in-law were also deputy Sheriffs. “It runs in the family” he said.

He’s also a huge San Francisco Giant’s fan. He had just finished watching the Giants game and was babysitting his two grandchildren. He put on some Nickelodeon cartoons for the kids while Dustin literally “whistled while he worked” on the kitchen plumbing. There was a little sign hanging up in the kitchen that said, “Welcome to Nana’s place”. Todd said, they’re Nana’s kids, they just tolerate me”.

While Dustin meticulously worked on the leaks in the kitchen and replaced the   worn out parts, their black and white Chihuahua named Cricket watched over the job as her tail wagged vigorously. Dustin had a little doggie apprentice!

Todd L. seemed surprised Cricket was so well behaved around a uniformed stranger, “She barks non-stop at the pest control guy…she always goes berserk!” Dustin dryly remarked, “Dogs sense good people” as he gave her a little scratch behind the ears. Cricket probably DID sense that Dustin was an animal lover. He’s got quite the menagerie where he lives in Curtis Park, 3 dogs and 2 cats.

After Dustin expertly completed the plumbing job he said goodbye to the family, and of course Cricket, and headed to his next plumbing job. Dustin, who was an electrician before coming to Bonney Plumbing Heating & Air, comes from a family of electricians. “They were happy I was going to be a plumber, turned out to be the best choice I ever made”.

Got leaks? Don’t worry, we’re on it! One of our Certified Premiere Plumbers is always ready to assist you, just like Dustin did.